We were already very much looking forward to the famous Tiger’s Nest monastery – a highlight of the trip through the country for many visitors.

What is so special about Taktshang – that’s how the locals call this place? Well, first of all, it is a very picturesque place. A monastery nested on a super steep rock face in the Himalayan mountains. But why do humans build a monastery exactly there – at one of the most difficult places to build a structure? Sure, the view is extraordinary, but there are maybe other places with a nice view but easier access? 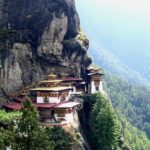 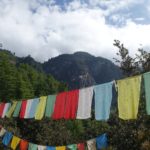 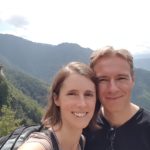 The legend and history of the monastery

There are different legends explaining the name “Tiger’s Nest”. Tigers may exist in the very south of Bhutan at the lowlands and borders towards India, but at 3000 m altitude, you really need a legend to explain their existence.

One legend is about Guru Padmasambhava (also referred to as Guru Rinpoche), who in the 8th century introduced Buddhism in the area. He is kind of a Bhutanese “celebrity”. It is told that he was flying on the back of a tiger to that place. In one legend this tiger was a transformed, former empress. In all legends, either the Guru did many wonders and or meditated in the caves the monastery is built around, to complete the eighth incarnation (i.e. entered nirvana). From the 11th century until now, the place has been very sacred and important for Bhutanese people.

From an architectural history, today’s visible monastery was completed in 1692. About 300 years later, in 1998, a fire broke out in one of the buildings. After restoration, Taktshang was back to its original form by 2005.

How it is built

The entire structure is literally clinging at the rock face. The precipice is several hundred meters deep…

There are four main temples with balconies and buildings for accommodation of the monks. All of them connect with stairs and passages, hammered into the rocks. There are eight caves with strong religious importance: demons were defeated and Guru Rinpoche meditated in the caves.

It is difficult to describe – but there is magic at this place. It is very calm and I felt positive vibes and happiness. Maybe because I felt very happy and blessed to be able to visit this very special monastery. 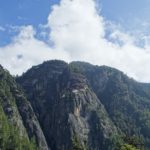 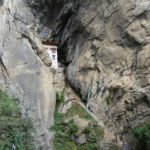 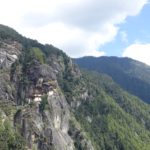 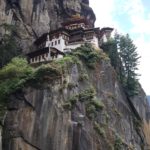 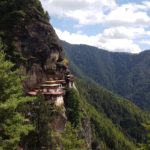 The ascent to the Tiger’s Nest monastery

The monastery itself is not crowded – which was quite a positive surprise for us. The main reason is the accessibility. No bus nor car access – what a blessing. It is possible to drive from Paro to the parking at the foot of the mountain from where you have to walk. Some of the magic of this place is for sure the fact that you have to walk up and only slowly approach it. It is a privilege to get there and should not be spoiled by large groups of tourists who just want to tick off another destination.

Depending on your fitness level and the time you want to spend to admire the view, do bird watching et cetera, you need 2 to 3 hours for the path ascending by approximately 800m to 3000m altitude. Half of the way is possible on horseback. For the physically challenged, this is at least a possibility to see tiger’s nest and have a cup of tea or try the ascent from there. I am not sure if it is possible to ride down as well.

For us, it was a nice workout but for sure not the toughest hike on our journey. Nevertheless, we were very pleased when Tenzin all of a sudden took a chocolate bar out of his traditional clothing “pocket” at the belly *smiley smiling* 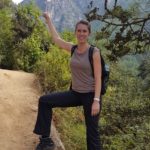 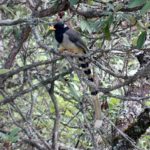 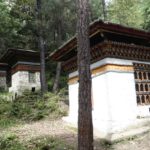 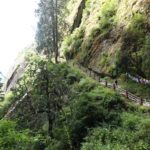 After that special visit, the day had two more highlights for us: a traditional hot bath and a superb farmhouse dinner.

Hot bath sounds rather nice but not special. A traditional hot Bhutanese bath is something definitely worth a try. The wooden bathtub has a separated section for the huge stones to heat up the bathing water. River bebbles are heated in an oversize pizza wood fire oven and put into the separate section with a nice sizzle. With a huge wooden stick the water is stirred and some herbs are added. Soaking in that bathtub and enjoying the nature around (of course, this was an outdoor pleasure) is just fabulous! 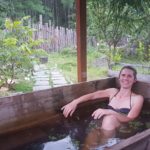 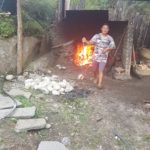 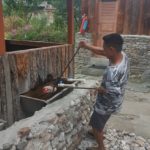 Best food can be found at farmhouses, not hotels

Since it was the last evening, Tenzin mentioned already in the morning that the owner of the travel agency wanted to have dinner with us in the hotel. What to say… last dinner in a hotel? Tasteless / adjusted to western taste? Oh no… Ok, here was the deal: we of course talk to the owners and tell them how happy we are with everything (which of course was true), and in return we go somewhere, where we can have a real and yummy Bhutanese dinner. Tenzin smiled and said that we can do so, he had an idea where to go.

When we met at the agreed time, Tashi was there as well but without the car. We can walk, they said. I asked, “Tashi, you are joining, that is really nice!” “Yes, good food!!” he said with sparking eyes. Oh yes, he was so right…

Just a couple of minutes’ walk we went to a farmhouse where the wife and family of another driver lives. We were welcomed and asked to come inside. While the last preparations on the dinner, Tenzin showed us a room with a shrine and small “doors” below the windows. Those little sliding “doors” were common in all farmhouses, he explained. Men could come in with a ladder to visit the women in the farmhouse! However, if the ladies did not want to be visited, they just did not open or purred water or something else down. “WhatsApp has made life of Bhutanese man so much easier!” he explained, being completely serious about the topic! 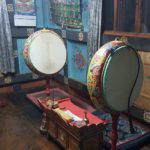 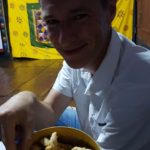 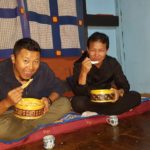 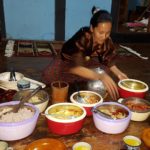 The dinner was a feast, rich in chili of course, but delicious. A very nice last evening in Bhutan, before we headed across the border into Indias Assam and Meghalaya region.