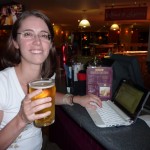 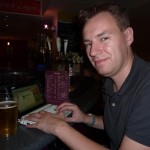 Unfortunately some staff at Heathrow airport made the nice Spanish wine pictured disappear quickly from our minds. All flights from Madrid to Quito for the next days were fully (over) booked already *smiley sad*

Timing-wise our solution with a cheap flight to London* and starting our round-the-world ticket from there, did not pay off. But it was still worth the few hundred Euros we saved this way *smiley like*

And still we were some of the lucky few ones, that got a re-routing ticket with only a day delay in the end: One night in London, early morning flight to Miami, clearing immigration after some few hours in a queue, just to directly run to a connection from there to Quito.

Not as planned, but hey, we are on vacation – and a long one, where one day doesn’t make a difference and where we most likely will have many more “unplanned” adventures ahead of us *smiley smiling*

Cheers from London Heathrow, with a cold Strongbow!

After this change of plans and small detour we finally made it to our first planned destination Quito, the capital of Ecuador *smiley cool*

Note: This post was originally written in German back in 2009 and we gave it a “refresh” when transferring to our new domain in 2019