Yes, believe it or not – this question occurs even if you talk to fellow travellers around in Ecuador. It’s obviously not the standard destination, even though it is listed as one of the places to see for Ecuador.

Why it is not that touristy as other places? Easy to explain, if you just reference to the appropriate Lonely Planet section about transportation starting “No busses go all around the loop…” and closing with “Don’t worry – everyone’s confused.”

But that simply couldn’t scare us off!

“Base camp” for the start was easily set up in Latacunga. Anything special about it…? No! It is an easy going town on the Panamericana – South Americas blood stream and everything but touristy.

And it was here, that I had one of the most funny conversations with local people so far: Imagine you enter a bakery and wanna buy some bread… For sure your Spanish is bad, but well enough – at least pointing at pieces – to show what you want and the lady in the bakery manages English well enough to make sure how much it costs. The usual question where you are from and your standard answer “Aleman” is followed by a surprised smile from the bakery lady… “Aleman, Frankfurt, train station” – and she obviously has been there before, because she can describe – or better point out with her hands – how the roof of the train station looks like *smiley smiling* 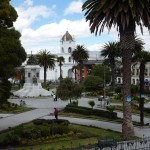 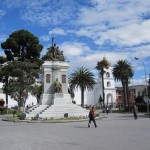 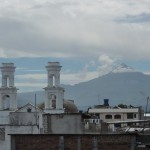 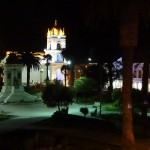 Let’s skip the rest of day two in the Quilotoa Loop – it would have been to be described with details of stomach failure – obviously some left-overs from not so well boiled water in the refuge on Cotopaxi…we still hope all the “real” climbers to summit next day after we left git better boiled water!

In a result of the additional day in Latucunga, we decided to cut short the rest of the loop and instead of making it a full circle only going half way up until the crater and then return the same way…

After an interesting bus ride (see pictures below) we arrived in the famous city of Zumbahua, which – according to our guidebook is famous for its Saturday market and gets lively on Friday evenings with people coming into town therefore… Well, let’s assume the author of the guidebook visited another town…the city center – as far as you can say that for a city mainly consisting of a few houses around the central plaza – was dead on Friday! 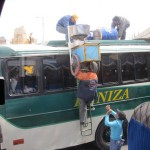 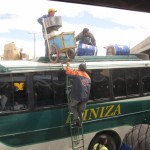 Awaking on Saturday morning was another story… Yes, the pictures show the same plaza *smiley winking* A buzzeling market – and one, that was definitely not only there for tourists *smiley smiling* 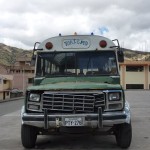 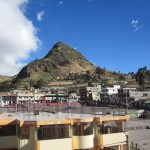 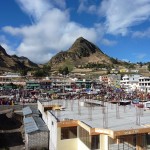 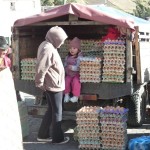 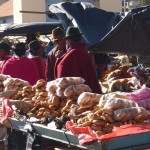 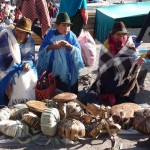 A nice ride on the back of a truck together with locals and their stuff bought on the market brought us up the hill to Quilotoa for only one dollar each – and even if the drive itself looked and felt quite rough, none of the eggs that have been transported by the locals got broken *smiley smiling*

Quilotoa is a volcanic left over, a crater at around 4000m above sea level with the crater lake being some 400m lower – and you can climb down, which we of course did *smiley winking* Being windy at the top it becomes much warmer down at the lake and you can enjoy the scenery – until it starts raining and you “hurry” to get up…

We actually tried both possibilities to get up:

1) By horse: Cost 5$, takes around 30 minutes (unless you are heavy-weight…see pictures below *smiley winking* ) and was undertaken by the “Smiling Iris”

2) By foot: Cost 0$ but a lot of sweat, takes around 1,5 to 2 hours (especially if you try an “alternative” way for the first few hundred meters and need to turn around as it proves not to be that straight forward) and was undertaken by “Breathless Thorsten”

Another highlight of today? So far I would consider this our coldest night…sleeping bags have been definitely preferred to the prepared bed with only a couple of blankets over each other! 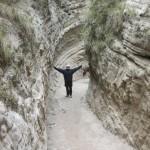 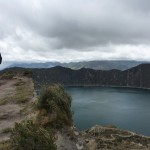 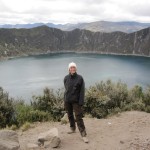 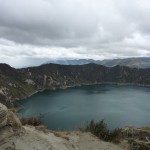 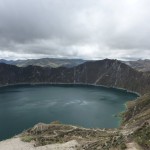 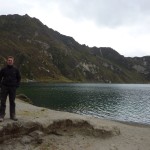 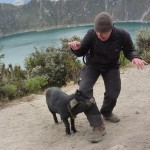 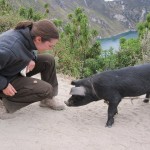 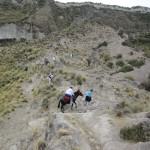 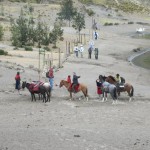 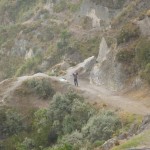 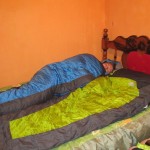 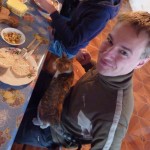 The main plaza in Zumbahua was back to the status of Friday *smiley winking* But it was anyhow only a transfer station – back on the bus to Latacunga, that was just passing through, when we arrived…

Yet another already known “terminal terrestre” – the bus station of Latacunga, but again only for changing the bus, spending another dollar each for our way to Ambato.

Right, this day can easily be called a “transfer day”, spending all the time searching for transportation options, waiting for the departure and sitting in busses… But Ambato held a surprise for us *smiley winking*

Arriving at the “terminal terrestre” we immediately searched for the busses to Banos – which according to our guidebook should leave every half hour or so from here. But only some busses going further to Puyo seemed to be offered…so we waited for the next departure of one of them. After we noticed, that they are booked out and didn’t wanna take us only for the way to Banos, we inquired a bit more thoroughly and…surprise, there is another “terminal” where busses to Banos leave, only a taxi ride away.

Well, the so called “terminal” was basically a corner a bit outside of town beside a gas station, but – believe it or not – after only two minutes waiting a to Banos picked us up *smiley smiling*

Wanna know, what “banos” means? And why the city is called like that? Just head on to our Banos experience!