We were lucky to be in town while the Thimphu festival – one of the biggest in Bhutan – was on. Apparently the Tshechu is like Christmas, Easter and a city festival together for the Bhutanese living in the Thimphu valley. Months in advance people plan what they are going to wear. New clothes are being made. On the day itself, kids are often sent in the very early morning to reserve a place for the family, because literally EVERYBODY will go there, watch, meet and enjoy. 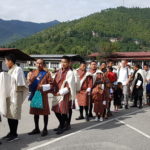 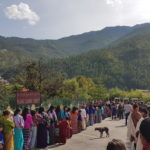 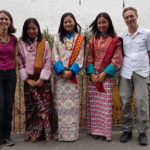 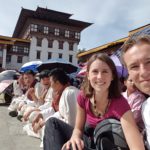 After our adventurous landing in Paro airport we made it safely through the mountain road to Bhutans capital, Thimphu.

Since the festival is the biggest of the country and the one for the capital, there is a safety check before entering into the Dzong area: You are not allowed any more to bring your knife. Every Bhutanese man used to carry a proper knife – so for some this is a very strange feeling nowadays to be without.

In the line (I went to the women’s line while Thorsten, Tezin and Tashi lined up with the men), I already made friends. It is amazing how well Bhutanese people speak English. Since the time when Bhutan opened to the western world, the public schools teach English – not only as a foreign language, but as a teaching language for most of the subjects. The ladies in the line wanted to know where I was from, if this is my first festival, and so on. So it was lots of fun to queue and after entering I was asked, if we would like to take a joint picture. Well, the ladies definitely dressed up much more than we did – Thorsten was also honored to be asked to join the picture, even if his dress was definitely not a match…

Mask dances based on mystical tellings

The entire day is filled with different kind of dances, all of them telling detailed stories. You have to study for quite some time the mythology and religion to understand at least the basics. To be honest, despite our guide Tenzin trying his best, we failed on that part and just enjoyed the vibe and colorful performances *smiley winking*

If you cannot sit on the floor or on the stone steps for hours and hours, then you will not be able to become a local… For us it was just amazing and as a foreigner you have the advantage to be able to move around respectfully. And even without understanding much more than “the good guy” and “the bad guy” principle behind the dances, the colors and the atmosphere were just remarkable. 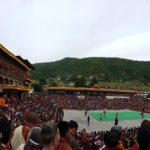 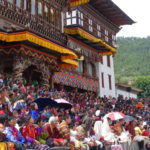 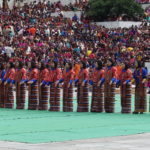 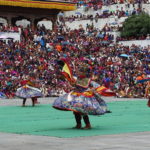 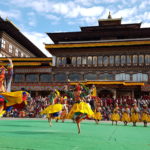 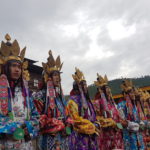 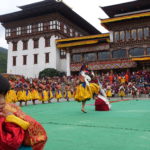 During the festival, you also get reminded a little about Switzerland with its Basel Fassenacht (carnival), where wooden masks are also common.

The different animals represent Bhutanese half-gods with different characters. The red guy is a kind of clown with a giant phallus and his job is to direct the actions of the ceremony and keep the people entertained with various kinds of jokes. In Bhutan you can find lots of paintings on corners of farmhouse walls or above their doors showing giant phallus – its a sign of fertility, used since ancient times and much needed in agriculture. 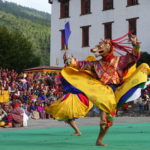 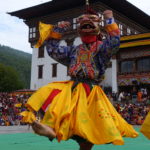 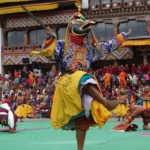 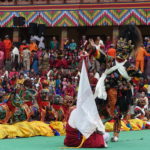 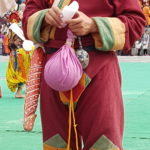 Apart from the dances, masks and costumes, the people made up the atmosphere. Since the planning for the outfit is on for months, everyone is wearing their best dresses and jewelry. From small kids, dressed in the cutest way, to men wearing the traditional booths, it is a complete different world for us westerners. Not many tourists are around, so your eyes just don’t get tired of watching the sea of colors literally “dancing” by…

A big family happening and unique experience for us

Since this is a full- (or even multi-) day experience, families typically also bring lots of food to snack during the day. We left around lunch time for some food in a nearby local home (yes, we finally get local, homemade food which is super yummy and boarderline spicy). To be fair, we would also have survived with the food we got offered from all sides at the festival ground.

We really dived deep into the cultural live of the Bhutanese, getting the chance to spend that festival day together with them, eating at a locals home and being warmely welcomed wherever we went. Nothing like a normal hotel stay, guided tours and international meals… 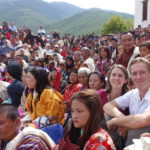 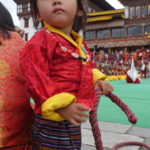 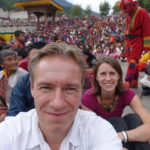 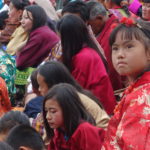 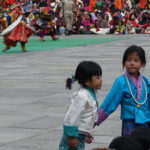 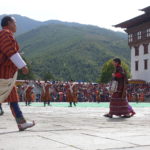 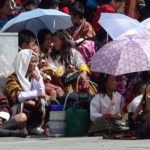 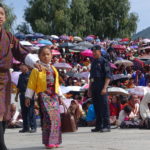 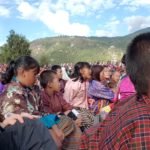 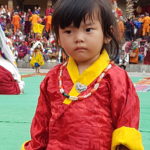 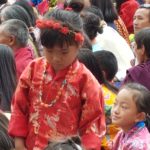 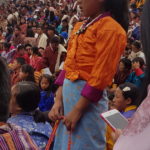 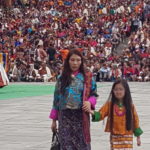 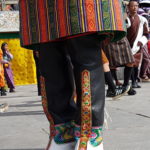 To sum up this amazing day: If you ever have the chance, it is a must-do to spend a day at a Bhutanese festival! Wear comfortable cloths but dress up as much as possible – best choose the most colorful pieces you have with you. Bring a scarf or hat to cover from the sun, as it can be brutal and there is not much shade. Bring your camera with enough space on the memory card and a big bottle of water.